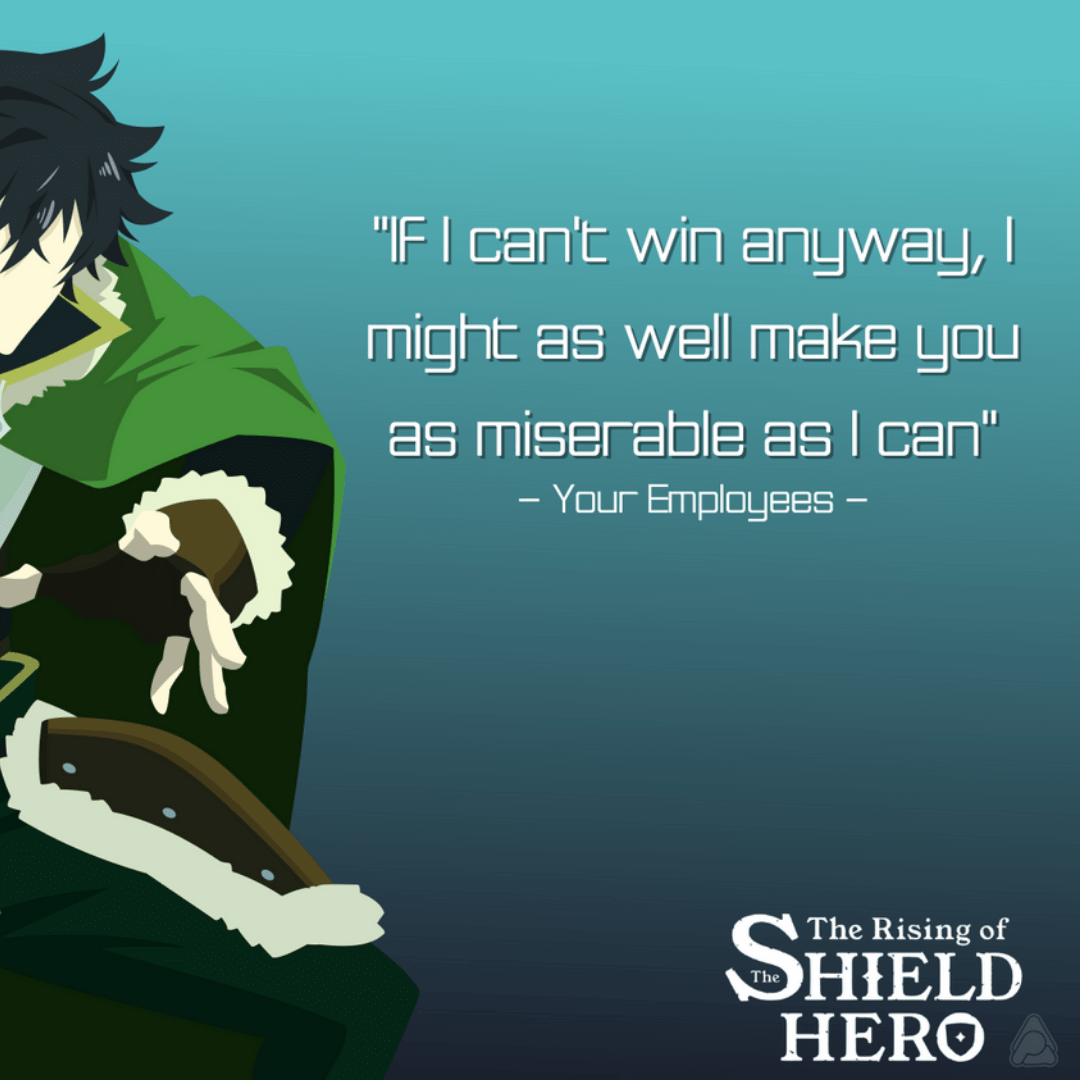 Caution: may contain spoilers about The Rising of the Shield Hero anime series.

Our protagonist, Naofumi, gets summoned to an alternate reality where he and three others are charged with protecting the realm of Melromarc from the waves of catastrophe. Upon their arrival, King Melromarc immediately treats Naofumi with disdain due to his status as the Shield Hero. As we find out in even the first episode, the king and his daughter, Princess Malty, seem to have it out for him. Within the first episode our hero is reduced to a criminal in the eyes of everyone in the capital city; leaving him to fend for himself.

Yikes! How would you feel if you were blackmailed and ostracized for something you didn’t do and for a title you didn’t choose? One day one of your new position on a team?

Throughout the series we discover King Melromarc has a history with the previous shield hero and is looking for someone to take a grudge out on. Lo and behold, in drops Naofumi (literally) – a man who knows nothing about the world he suddenly finds himself in. “The perfect target!” the king thinks. Supposedly each hero arrives with an assumed amount of knowledge about the realm.

Not Naofumi. Somehow he get missed on that.

Let’s look at the leadership pitfalls exemplified by King Melromarc:

As is shown frequently, even in the first few episodes, the king has a deep-seated disdain for ‘the Shield Hero.’ Unfortunately, Naofumi gets to be the recipient of his ire. As the acting authority figure, the king would do well to not play favorites in spite of his personal feelings. (We find out later that Melromarc is a country ruled by a matriarchy, but the queen is abroad tending to diplomatic matters for most of the series.)

This situation brings to mind the adage, “praise in public, coach in private.” As the authority figure the king could benefit immensely from equal treatment of everybody; not just Naofumi. When people feel like they have been singled out for one reason or another, their trust levels in the leader and often the rest of the team drop significantly. They start to feel as if they are the only one they can trust and act accordingly.

Rising of the Shield Hero had me yelling at my TV like a jock yells at football. The biggest reason is because of how unfairly Naofumi and by extension his party are treated by the powers that be. Time and again, Naofumi’s pleas to be heard are blatantly ignored.

Good leaders are good listeners. They endeavor to understand as much as they can about all the sides involved so they can make the right call. There are situations where time does not permit as much discussion/information gathering; however, as a leader it is important to gather a data set that is as well-rounded as possible.

When everyone feels understood, trust, morale, and productivity will go up.

King Melromarc and Malty operate a conspiracy to see the Shield Hero torn down starting in episode one. They don’t even bother to hide it. Can you imagine how detrimental a ploy like that is IRL? People go to jail for those kinds of conspiracies.

This is another behavior that will absolutely destroy any trust your ‘subjects’ (i.e. your team or direct reports) have with you and moreover the company you work for. Whether a conspiracy is being carried out in secret or out in the open, leaders and their conspirators stand to lose not only trust, but often their jobs and future livelihoods. It boils down to this: working with people and being honest and open will get you so much farther than working against them through deceit and corruption.

At the end of the day how you lead is up to you. Would you rather be a dishonorable leader like King Melromarc? Or would you prefer to have your honor and conscience in tact like Naofumi? The choice is yours. If you want to see these situations in action, go watch the anime (Crunchyroll link).

And if you want help becoming a better leader yourself go ahead and click Contact to chat with me!

There you have how to be a terrible leader according to Rising of the Shield Hero. If you enjoyed this article be sure to check out more of Adam Kobler’s thoughts at Protagonist! Also don’t miss my conversation with Adam on my Podcast or YouTube.